A proud past and a bright future

Lacrosse showcases the best of sports — speed, athleticism, skill, heart, determination — and it’s a recipe for a lifelong love affair. The first girls’ lacrosse program in the United States was established nearly a century ago and the sport continues to thrive. No other sport is growing faster at the high school or college level, resulting in countless opportunities for young women to make their mark.

Lacrosse was originated by Native Americans and is regarded as the oldest sport played on the North American continent. The first recorded women’s game was played in Scotland in 1890 and Rosabelle Sinclair started a girls’ lacrosse team at the Bryn Mawr School in Baltimore in 1926, the first team in the United States. In 1935, the U.S. sent a touring team to England and continued to do so for half a century until the first women’s world championship was held in 1982, resulting in the first of a record eight world championships for the United States.

Lacrosse has been the fastest-growing team sport in the United States for most of the last two decades. There are more than 500 NCAA varsity women’s programs today, up from just 344 in 2010. Similar growth has occurred at the youth and high school levels as America continues to further embrace the continent’s first sport.

Minimal equipment is required in girls’ and women’s lacrosse due to its non-contact nature. A stick, mouthguard and protective eyewear are the only required items for most players. Headgear and close fitting gloves are optional for field players. Goalies are also required to wear a helmet with face mask, a separate throat protector, padded gloves and a chest protector. Visit our equipment page for complete details.

The rules of women’s lacrosse are designed with safety in mind and to ensure fair competition. USA Lacrosse, the National Federation of State High School Associations and the National Collegiate Athletic Association write the rules for the sport in the United States and the organizations often work together on rule development and player safety. Visit our rules page for complete information.

There are countless playing opportunities at the youth level through local community programs and club and travel programs. USA Lacrosse works directly with many of these clubs to help create a positive experience for participants. Visit our Where to Play page to find programs in your area that are connected with USA Lacrosse.

Lacrosse is an official championship sport by roughly half the states in the U.S. through the official state associations under the National Federation of State High Associations. Many other states offer varsity programs and championship opportunities through lacrosse-specific statewide organizations. There are also numerous clubs, both school-affiliated and private entities, providing opportunities for high school-aged players.

The wide range of playing levels means that almost anyone wishing to play at the collegiate level can find a home. The NCAA offers over 500 Division I, II and III varsity lacrosse programs. The USA Lacrosse Women’s Collegiate Lacrosse Associates (WCLA) has more than 200 club programs at schools nationwide. There are roughly 40 programs competing in the NAIA level and about 20 at the junior college level as well.

The Sky’s the Limit

Team USA stars Kayla Treanor and Michelle Tumolo didn’t pick up a stick until they were 14 years old. No matter when you start, you can chart your own course.

An arc marked in front of the goal used for the administration of major fouls. A defender may not remain in this area for more than three seconds unless closely marking her opponent.

A semi-circle area in front of each goal circle bounded by an arc 12 meters from the goal circles.

Using stick-to-stick contact to try and dislodge the ball.

An opportunity awarded to one player when a major or minor foul is committed by a player from the other team. All players must move 4 meters away from the player with the ball. When the whistle sounds to resume play, the ball carrier may run, pass or shoo

The circle around the goal to protect the goalkeeper. No player’s stick or body may “break” the plane of the goal circle.

Checking the stick only if the entire stick is below shoulder level. The check must be down and away from the body.

Closely guarding an opponent within a stick’s length.

A player may not use any part of her body to guard the goal in a manner that denies the attack the opportunity to shoot safety and encourages shooting at a player.

While defending within the 8-meter arc, a player may not remain in that area more than 3 seconds unless she is marking an opponent within a stick's length. 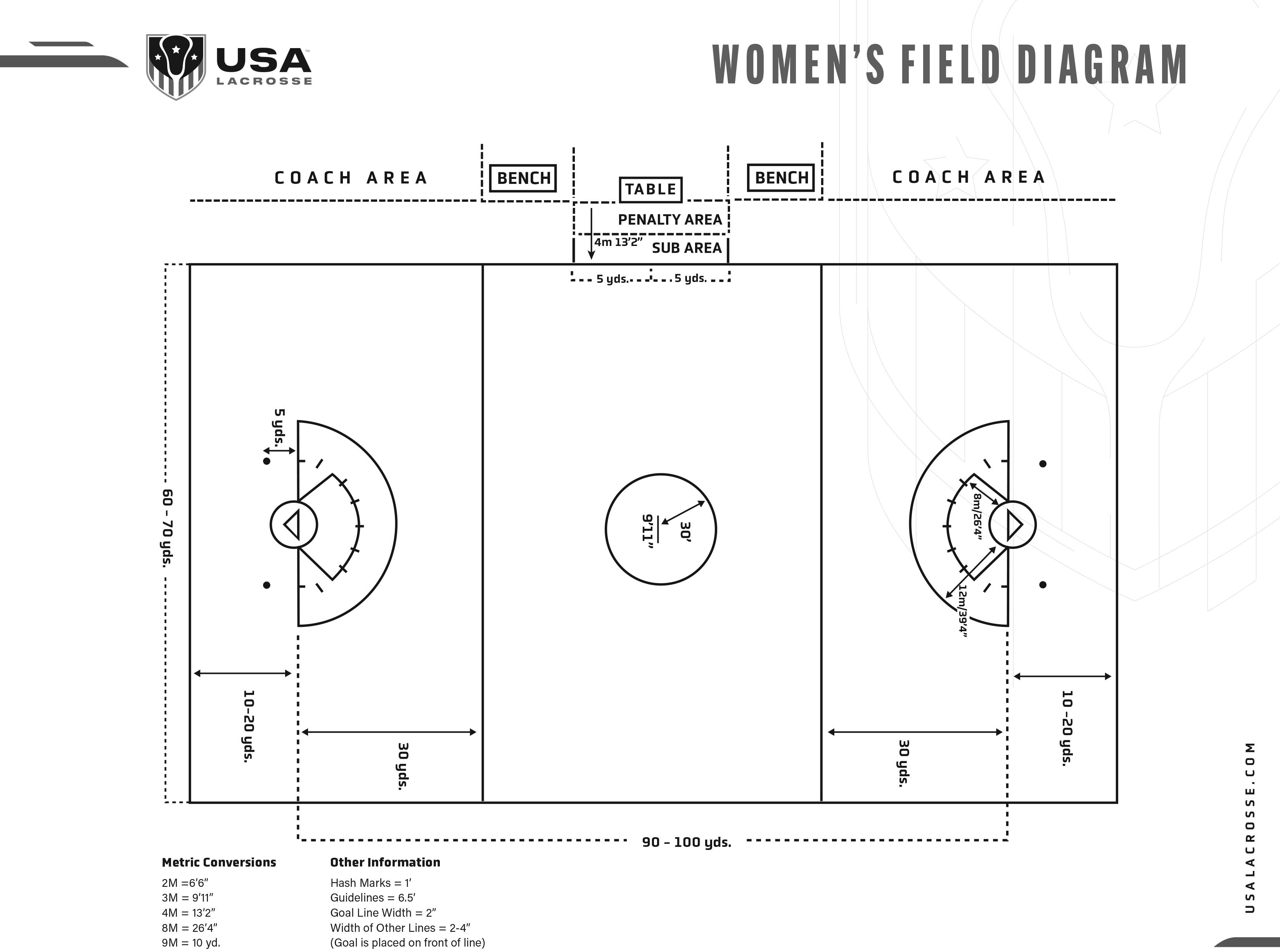 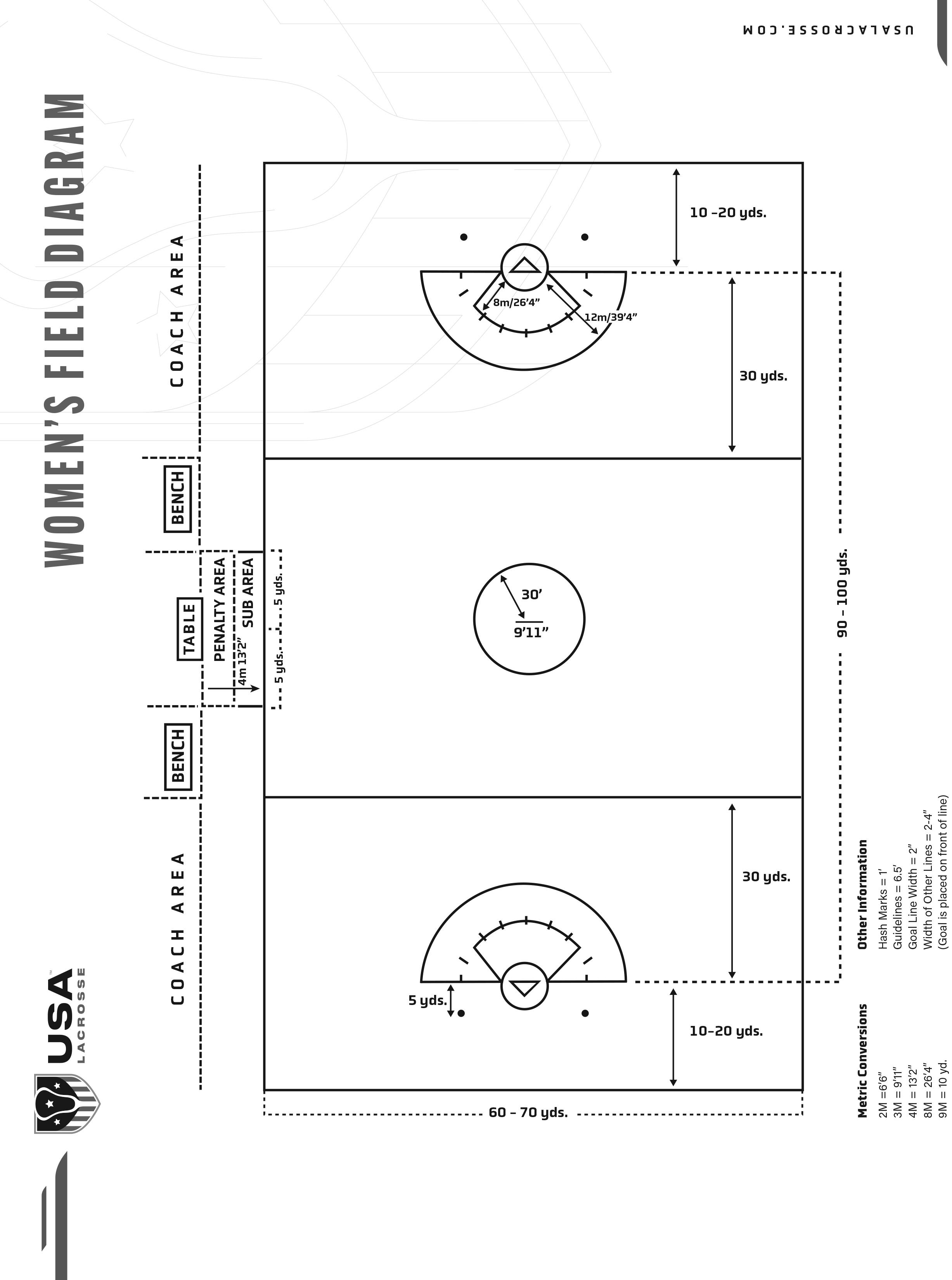